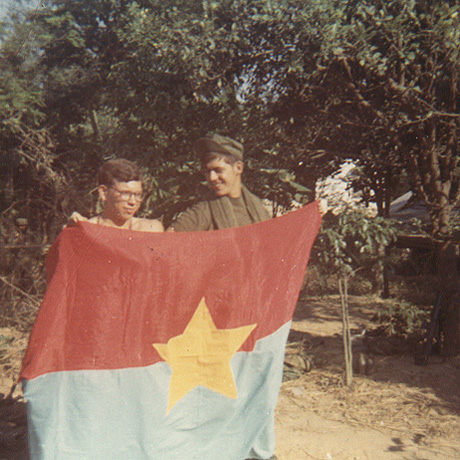 Rick “Doc” Doggett, left, and John “Crazy” Sigouin hold a Viet Cong flag captured by CAP 2-7-2 in a firefight on May 8, 1970. The article below is from the U.S. Army’s 9th Division newspaper. It explains the history of the flag and its symbolism.

DONG TAM (9th Inf)-The Viet Cong flag
dates back to 1954, when founders of the
National Liberation Front, the political arm
of the Viet Minh, designed the red, blue and
yellow standard.
The flag is divided horizontally into two
equal parts with a five-point star in the middle.
The upper section is red and stands for blood
spilled by the people in their alleged fight for
peace, represented by blue in the lower half of
the flag.
The yellow star stands for the Mongoloid race;
each point represents a separate class. The top
point symbolizes the students. The other points
moving clockwise represent farmers, industrialists, merchants and soldiers.